Among the Bonda, one of the most primitive tribe in India

Posted on October 15, 2012 by travelerreport 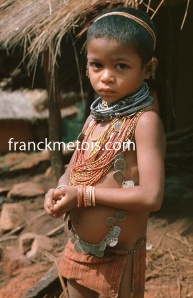 The “Bonda” are one of the many tribes living in the jungles of Orissa ( an eastern Indian state), one of the most primitive undoubtedly. Though few in numbers ( something like 6.000), they have successfully retained the distinctive features of their culture. Because of their geographical isolation but also because of their stubborn and independent character. Once regarded as a criminal tribe by the British administration because of their aggressiveness, they are still considered as dangerous. Indeed, once drunken ( and Bonda men are high consumers of alcohol), they become violent for any reason and sometimes kill. “Many” Bonda men are languishing in jail because they have been sentenced for murder.

In their daily life, Bonda are cultivators ( rice, wheat, vegetables,…). They rear cows, fowls,… Though forests have been depleted to a great extent, they still collect bamboo, wood, bark, wild grasses, fruits, mushrooms. They also sell their surplus and home-made ( rice) alcohol. Because they are reluctant to go to the plains, wage-earning is very limited.

In the Bonda culture, marriage is very important. Often, the Bonda wife is older than her husband. Indeed, girls prefer to marry younger boys because the husband would earn for them once they are old. Such a disparity in age leads to family quarrels, divorces but also to polygyny ( when a man is married with more than one woman) in some cases.

They believe in Mahaprabhu, the creator of the Universe, and many other deities like Hundi ( the Mother-Earth), Sindibor ( the village goddess),…Dhartani ( the deity of the cowshed), but also in benevolent as well as evil spirits, in witchcraft.( Death is believed to be the consequence of the work of evil spirits)  With the help of rice divination, traditional healers detect the spirits, they even communicate with them through trances. And to please the supernatural powers, Bonda offer ceremonies, rituals and sacrifices. To ensure safety and prosperity.

2 Responses to Among the Bonda, one of the most primitive tribe in India